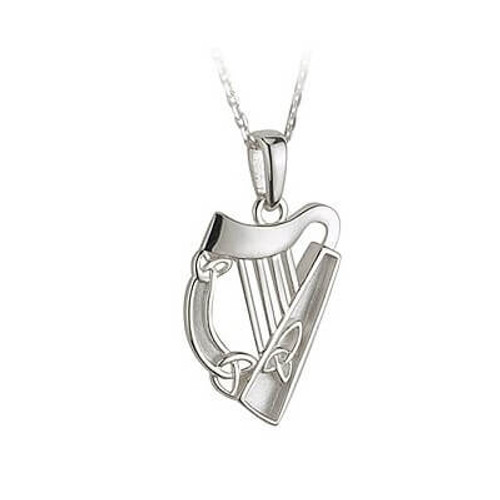 ■ A special pendant that perfectly encapsulates the rich history of Ireland, condensed into a special treasure that will be enjoyed for decades to come.
■ Not only is the harp an important symbol of Irish national identity, so too are the three engraved Celtic knots adorning this unique pendant.

■ Each pendant is 16 mm wide and 29 mm tall, and ships with an adjustable 18” sterling silver chain. It looks perfect dressing up or down.

■ Like many of our other popular giftware, these Celtic Harp Pendants are not always in stock so do not delay in ordering yours today!

■ Don’t forget! All orders within the US receive free three-day shipping! Don’t delay in ordering yours for that special occasion or special someone!

One of Ireland’s most enduring historical symbols is brought to life with this his elegant pendant necklace, featuring an intricately designed Irish harp in glimmering Sterling Silver. If you look closely, you will also notice subtle Celtic knot accents carefully engraved into the harp, deepening the cultural significance and beautiful qualities of this special pendant even further. Whether this pendant is for yourself or someone special in your life, there is truly no better way to show off Irish pride or love for Irish harp music than with this special pendant that will add the perfect finishing touch to any outfit.

This pendant is designed and manufactured in Ireland, and ships complete with an adjustable 18-inch sterling silver chain. While the shamrock or Irish flag has largely taken center stage as national symbols of Ireland in recent decades, the harp is actually the official symbol of the country and has been for many centuries. For anyone who has been to Ireland, this fact may be a bit more apparent as the harp can be found on Irish coins, official state documents, flags, and other important national monuments. Lost to the veil of history, we don’t know when exactly the harp started to serve as the national symbol of Ireland, but historians have determined it dates back at least 1000 years to the time of King Brian Boru, the last high king of Ireland.

Legend holds Boru was an accomplished harp player, and the wire-strung harp was an instrument of the aristocratic class for many hundreds of years. Harp players served as unofficial counselors to kings and were given titles and wealth for their abilities to play this hauntingly beautiful instrument. Rulers depended heavily on the advice of their harpers, consulting them in times of war and other political matters. The harps themselves were finely made and adorned with intricate engravings. These special pieces (and the people who played them) were highly revered 12th-century records allude to the Celtic harp being a popular instrument among European crusaders and love for Celtic harp music grew throughout Europe during this time.

In the 1500s, the harp became the official symbol of Ireland at the decree of Henry VIII. Likewise, the Celtic knot as long served as a symbol of the eternal cycles of life, love, death, and rebirth in Ireland for thousands of years. During the time of St. Patrick, the Celtic knot became associated with the Christian Holy Trinity and began to make its way into illuminated manuscripts, church architecture, and fine pieces of jewelry. Today we are very excited and honored to offer this beautiful pendant that so perfectly encapsulates the rich history of Irish music and national identity. If you are a lover of harp music or Irish history (or know someone who is), then this special pendant is a must-have. The person who receives this unique gift will feel as honored and special as the ancient harpers who lived among the Celtic kings and queens, and we are positive this pendant will become a family keepsake for many years to come.

From the same Collection

From the same Collection