It's almost peak wedding season, and with it comes the rush of registries and gifts. We've selected some of our favorite traditional Irish wedding presents if you want to focus on the couple's Irish or Celtic heritage. Weddings in Ireland today are diverse in style, with couples having a lot of leeway in terms of their preferences and beliefs. Looking back on Ireland’s history, weddings weren’t always like this. From Pagan customs to Catholic masses, they’ve gone through several radical changes!

Many traditional elements are still incorporated in modern weddings. The couples here don’t have to be Irish either—they can be Irish culture enthusiasts from another country, or they might simply like a particular custom. Some interesting (and still popular) traditions include handfasting, where a couple binds their hands together with cords while reciting their vows. Traditional Irish weddings have also toasted couples with alcohol, using whiskey or mead rather than the modern choice of champagne. Alternatively, couples can hire musicians that play traditional instruments like flutes, fiddles, and harps!

Whatever elements may be included in a modern Irish wedding, one thing is consistent: it’s a celebration that calls for community. Guests and loved ones are happy for the couple, and gift-giving is an essential part of this as well. If you’re trying to think of gift ideas for Irish weddings, you have a lot of choices! Good wedding gifts tend to be both practical and deeply personal, and in keeping with the theme, you can give items imbued with an Irish touch, from shamrock engravings to Irish blessings that could double as wedding readings.

Here are the 10 best Irish traditional gift ideas for newlyweds: 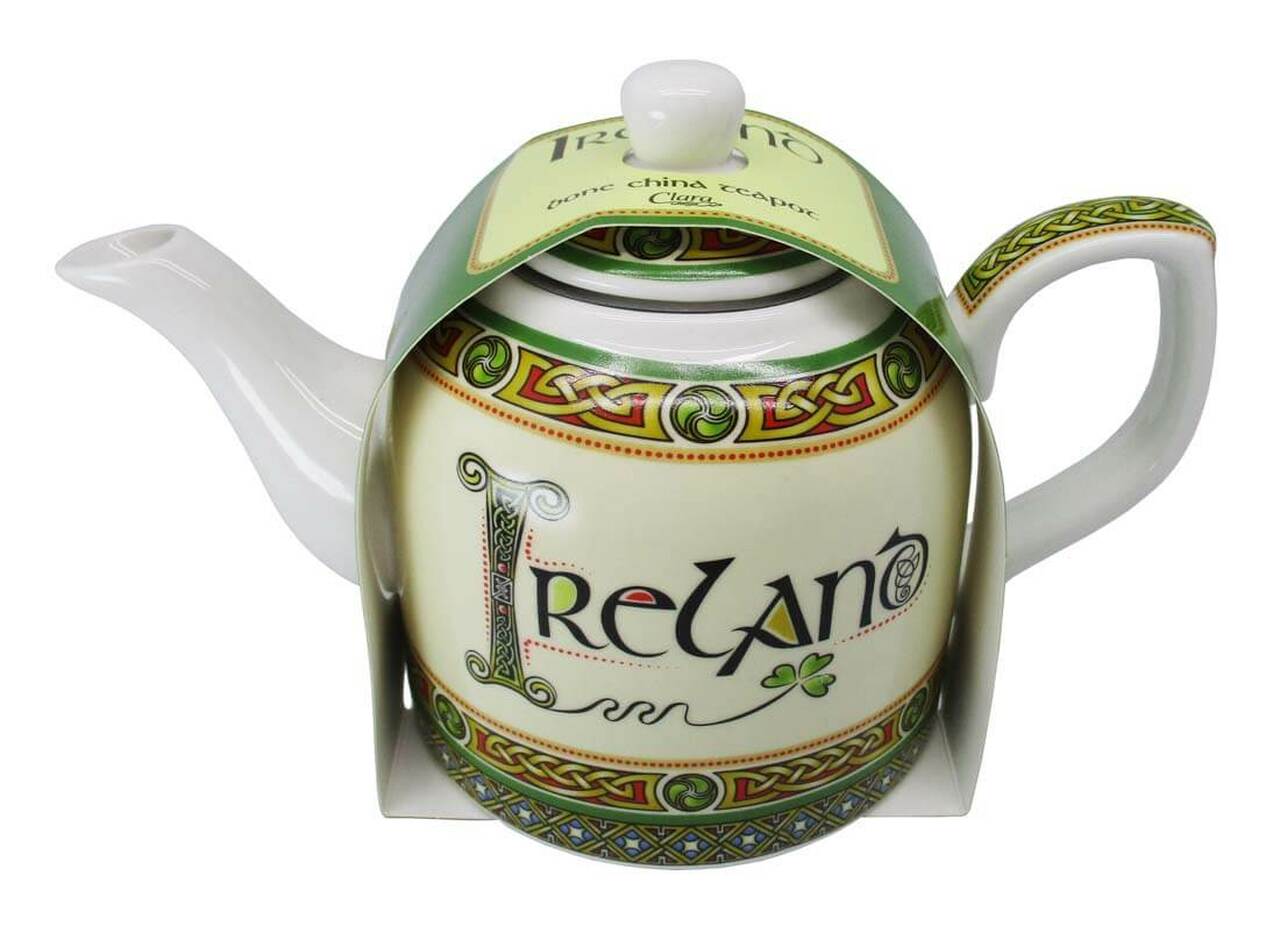 Even though Ireland’s well known for beer, it has an extremely strong tea culture. You could even say that tea is inseparable from Ireland. The Irish are actually said to drink more tea than alcohol, and they’re among the heaviest tea drinkers in the world, consuming more than four cups each day. If you ever get invited to an Irish home, they’ll be welcoming you with tea! For this reason, most Irish homes have their own teapots. For the Irish, teapots aren’t only vessels for tea—they’re associated with friendship, comfort, and joy, which is why a teapot makes for a lovely gift.

Recommendation: For those special occasions, this teapot is a delightful addition to tea sets. Crafted this way since the 1880s, it features iconic Irish symbols such as harps, seashells, and shamrocks, and it turns tea into a full-on aesthetic experience, not only for the tastebuds but also for the eyes. 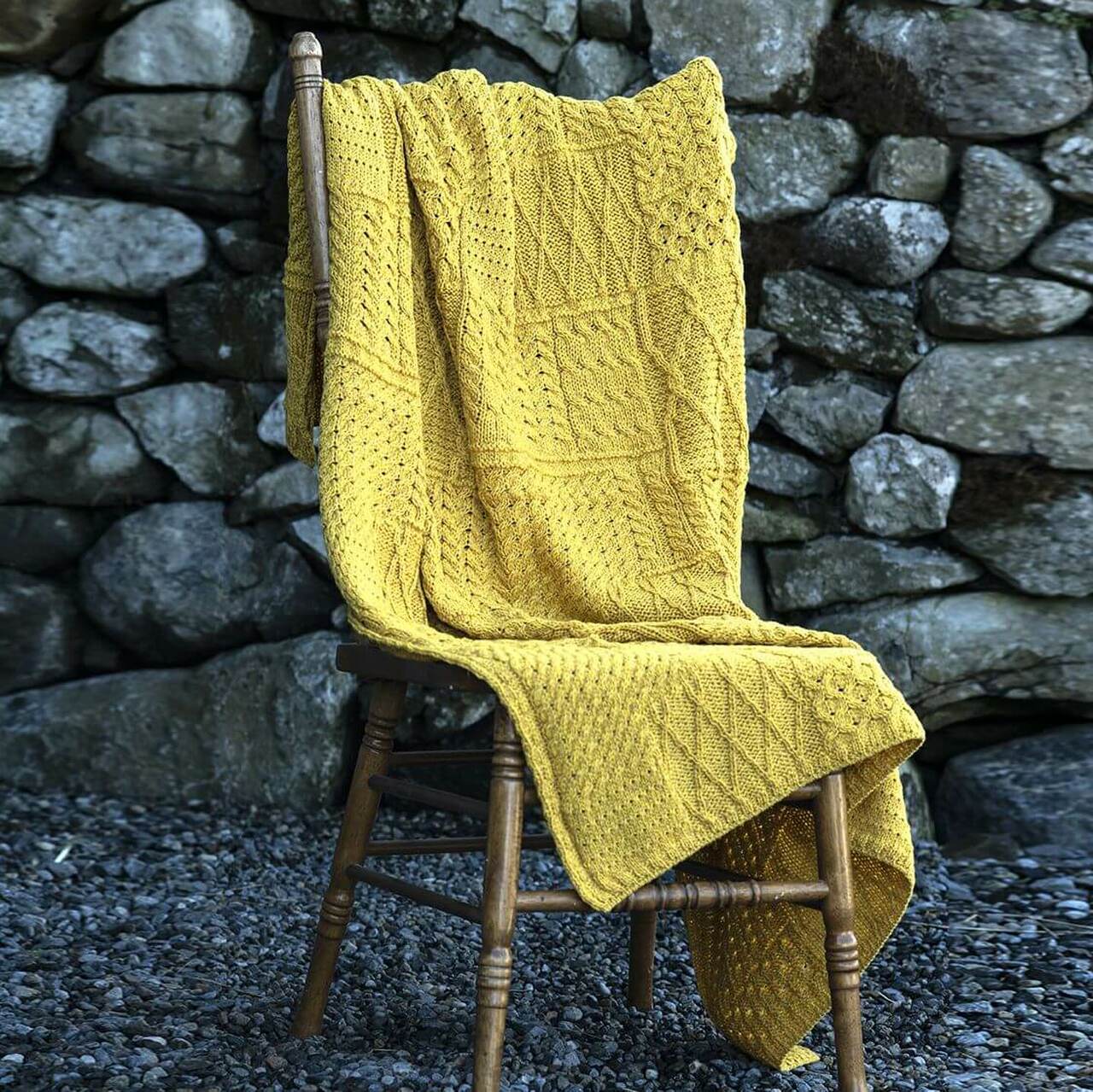 Ireland has made its mark in the world of textiles and fabrics. First, it came up with Aran stitches, which are knitting patterns said to have originated from fishermen in an Irish village. It’s also a top producer of Merino wool. This is an ultra-soft fabric that’s so much finer and more comfortable than standard wool. It also adjusts to body temperature, so that it keeps the wearer warm during winter and cools down during winter. The combination of Merino wool with Aran stitches is an Irish invention, and you can find it in sweaters, scarves, blankets, and even throws—any of which can be gifted to newlyweds.

Recommendation: The safest choice would be a throw or blanket, and this Merino Wool Throw is perfect for snuggling up with during winter or cold rainy days. Created by Carraig Donn, Ireland’s oldest known manufacturer of knitwear, its Aran stitches include trellis and cable patterns. 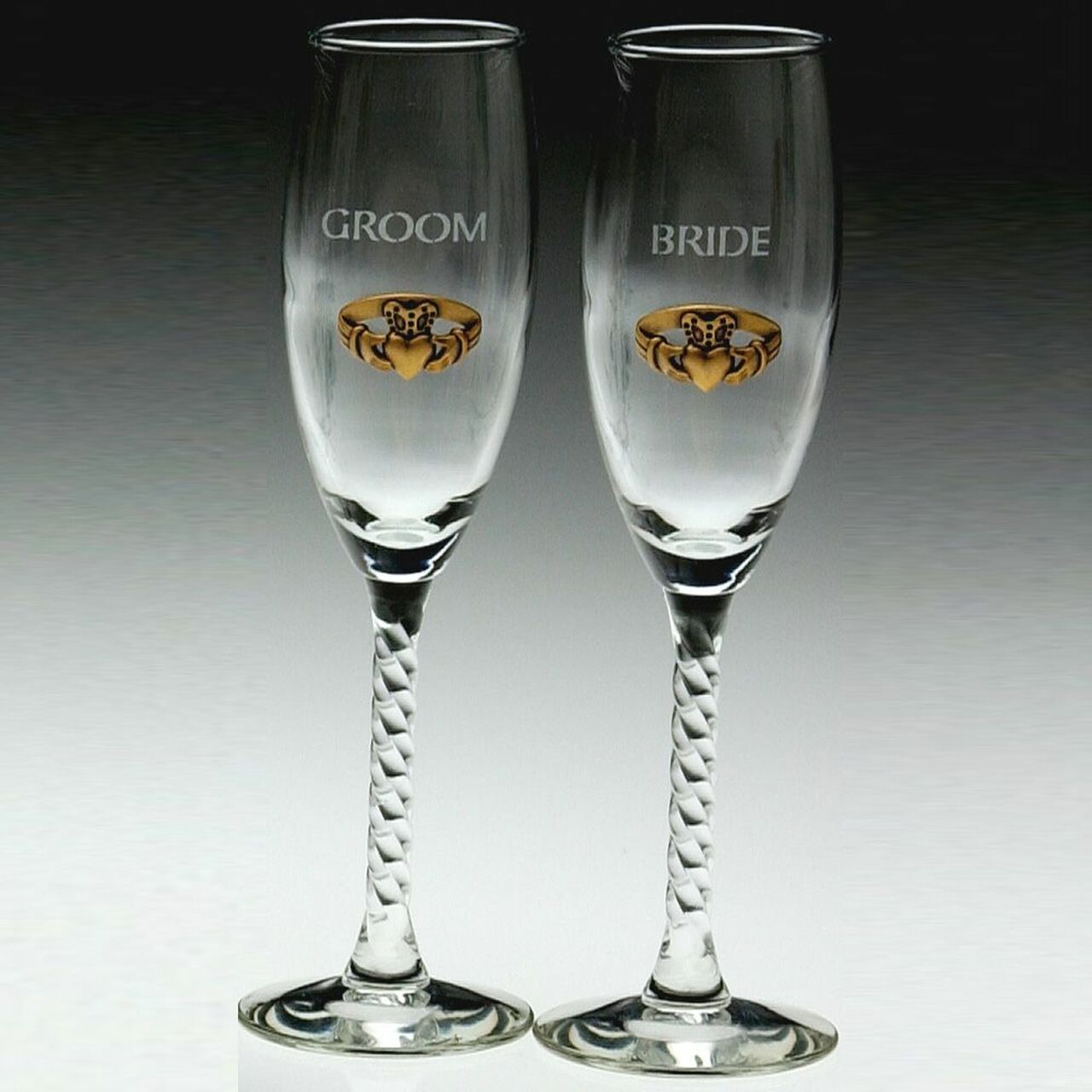 Here’s an unusual and fascinating wedding gift with roots that go far back into Irish culture: a wedding cup. Typically, it looks like an ornate goblet with two handles. Not for everyday use, it takes the spotlight during the couple’s first drink together as a married couple, usually right after the wedding. As the custom goes, they drink from it at the same time, which symbolizes their union in marriage and the merging together of their families. The wedding cup is also called a Quaich, and drinking from it was already widely practiced in the 15th century, even appearing in French, Jewish, and many other cultures.

Recommendation: Give a nod to tradition with a Claddagh Wedding Cup made in Ireland. It has all of the regalness of the original cup from long ago, bearing a full body made of pewter and a polished finish. Strikingly, it also displays the Claddagh, a classic Irish symbol for love and marriage. 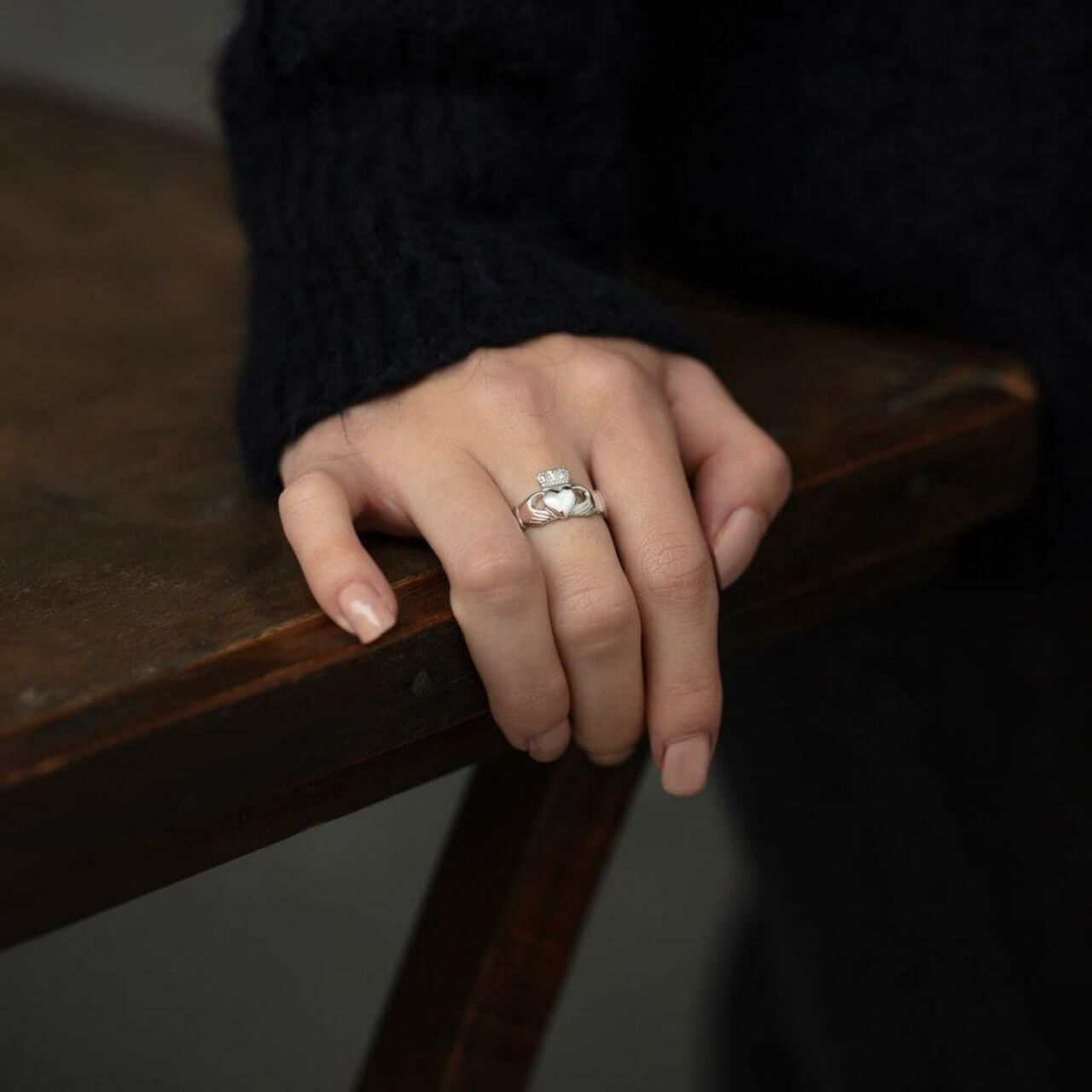 Claddagh rings are the quintessential traditional gifts! You’ll notice them right away because of their distinctive design: the ring band is carved to depict two hands holding a heart with a crown on top. The heart is the centerpiece, representing love, while the crown stands for loyalty and the hands holding the heart symbolize friendship—all of which are integral to a relationship, especially one that’s as committed as marriage. In fact, Claddagh rings are said to bring happiness to couples. Distinctly Irish, the Claddagh ring has been around ever since the 17th century, and many families count it as an heirloom, with mothers passing down the ring to their daughters.

Recommendation: This Claddagh Comfort Ring by ShanOre is simple and elegant. Authentic and handcrafted in Ireland, it’s made of sterling silver, and the inscription on the inside clearly explains what the ring means—“love, loyalty, and friendship.” 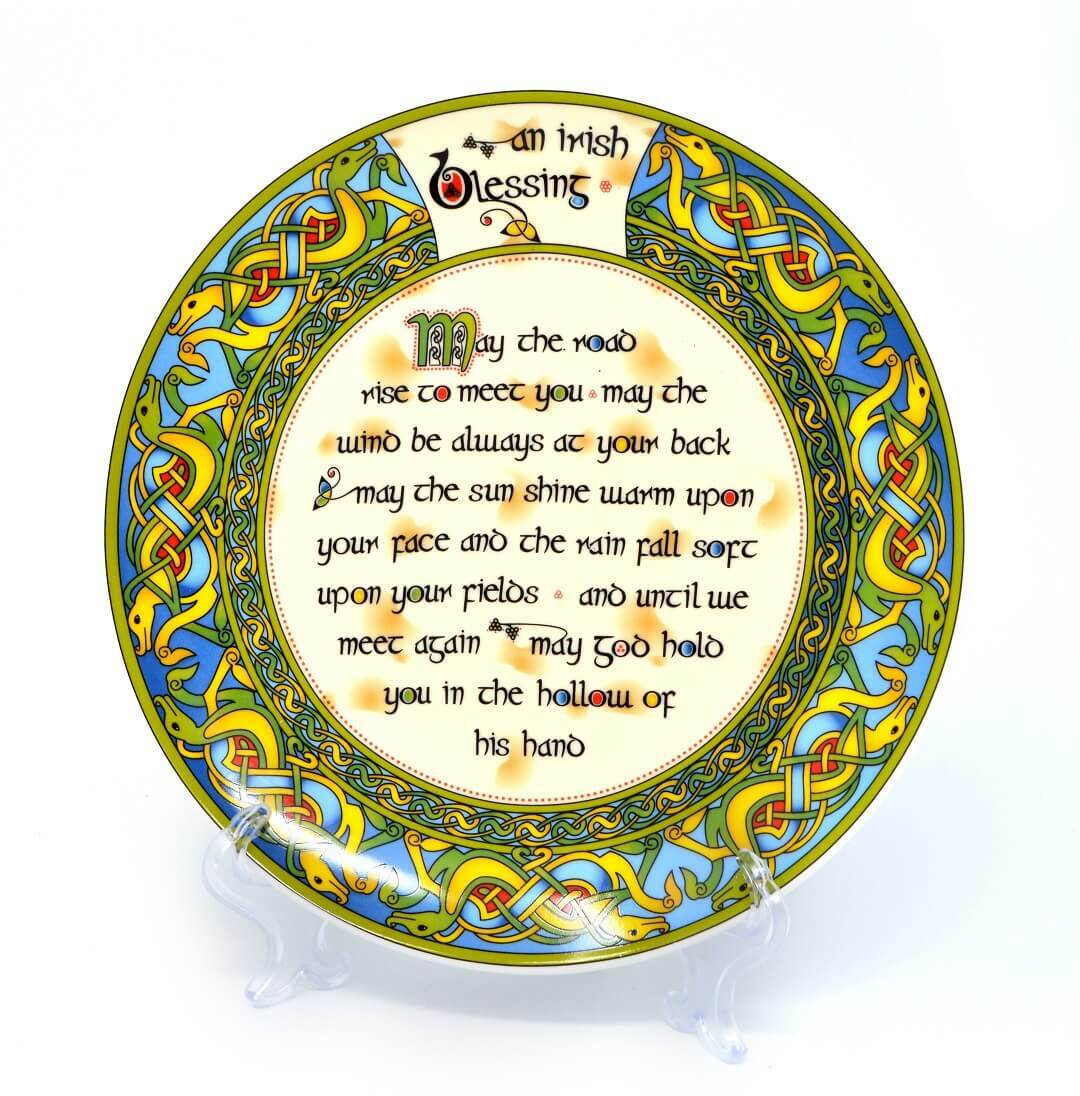 Regardless of the culture, plates are among the most popular traditional wedding gifts because they’re unfailingly useful and practical. In particular, decorative plates mark the significance of the occasion, and they fulfill a dual purpose—they’re great for displaying, but they can also be dined on when the mood is fancy enough. For an Irish wedding, you can go further and choose a decorative plate that comes with an Irish blessing. Even though they originate from centuries back, Irish wedding blessings remain heartwarming, wishing the couple happiness and love. They’re so well-phrased that they’re still read out loud in wedding toasts to this day!

Recommendation: Send your warm wishes with this Irish Blessing Plate. Classic Irish homes have a traditional blessing somewhere inside, and this plate can do that for newlyweds. The blessing is placed right at the center, surrounded by hand painted garlands and flowers in light pastel colors that are pleasing to look at. 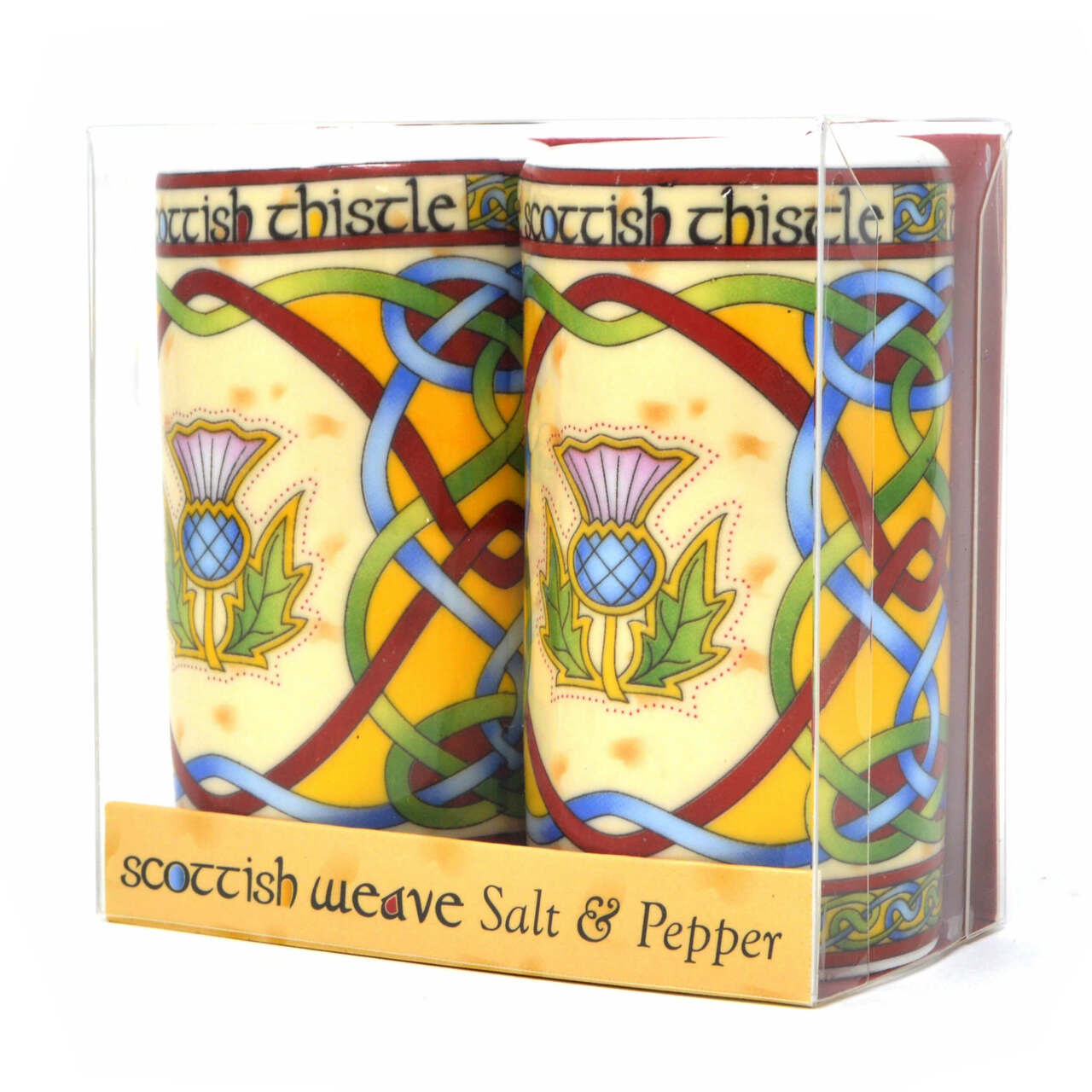 Wedding gifts have always been traditionally practical. When the bride and groom move in together, one of the spaces in their home that need the most attention is the kitchen. What’s found in the kitchen today may be quite different from what was there during the time of Irish folklore, but there is a pair of kitchen staples that remain the same: salt and pepper. In a lot of places, including UK and North Europe, food is mainly seasoned with salt and pepper, so most newlyweds will find this useful! Tradition also says that giving salt and pepper ensures that the couple will always have an abundance of food and their new life will have plenty of flavor and spice.

Recommendation: Average salt and pepper shakers won’t cut it. Consider these shakers by Belleek Pottery, one of the oldest and most respected porcelain companies in Ireland. This exact design has been around since the 1880s, and the shakers are accentuated with shamrocks and basket weave patterns. 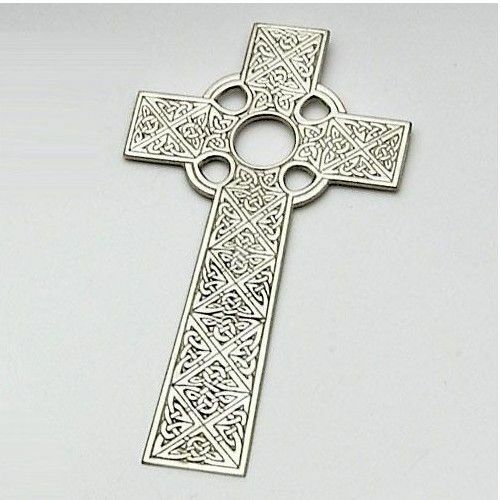 If the couple that you’re planning to give a gift to is Catholic, then they might appreciate a Celtic cross. Ireland has a deeply Catholic background, from St. Patrick as its patron saint to the numerous cathedrals all over the country. The Celtic cross is one of the testaments to this, slightly hinting at the country’s Celtic, pre-Christian origins as well. It’s more or less a regular cross except with a ring at the center. A common interpretation of this is the ring depicts a halo, which alludes to Jesus Christ. In a more romantic context, the ring represents infinite love, without beginning or end.

Recommendation: This beautiful handcrafted Pewter Celtic Cross was made in Ireland. It shows—the ring in the middle is thoughtfully carved to form five circles, and the arms and legs of the cross are etched with interweaving patterns. It’s also resistant to tarnish because it’s made of pure pewter! 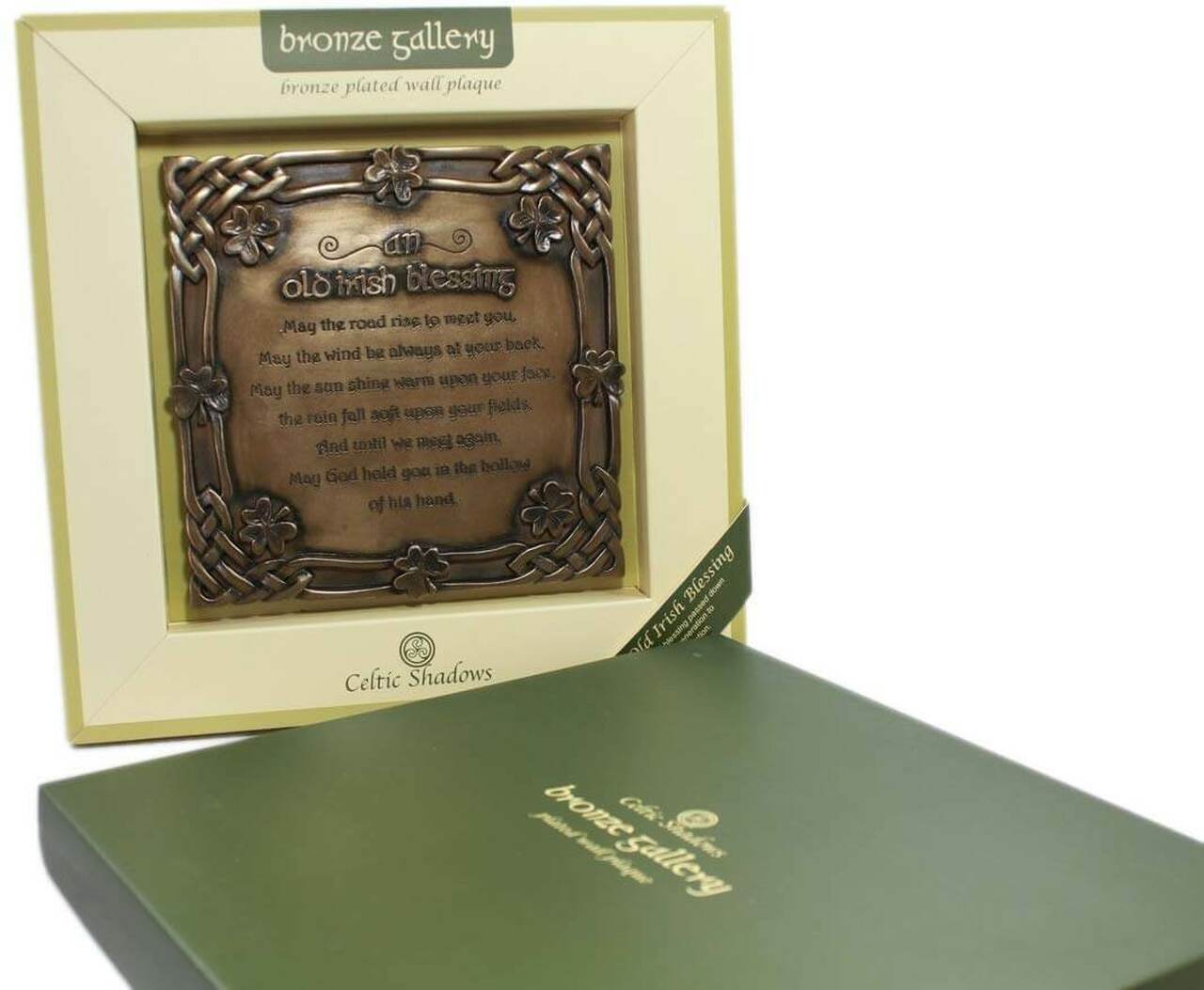 There are many ways to remember a wedding: photos in picture frames for the living room, souvenirs from the event, even the rings worn by the couple. You can send a celebratory follow-up using a wedding plaque. The regular wedding plaque shows the names of the couple and their exact wedding date, but why not go for an unconventional approach and make it all about an Irish blessing instead, which pretty much everyone loves? Irish blessings are known for being warm-hearted, poetic with metaphor and yet easy to understand for the heart, and their beauty and wisdom cuts across cultures.

Recommendation: Even at first glance, this Irish Wedding Plaque impresses right away with rich bronze plating. But what makes it stand out is the Irish blessing carved in ornate script, enclosed in a circle and surrounded by Celtic knots. It’s so exquisitely crafted that you simply have to put it out for display!

A CANDLE THAT REMINDS YOU OF HOME 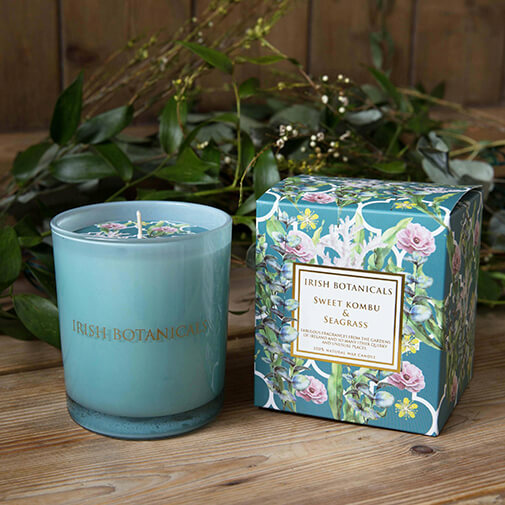 Scented candles make for a sensual gift that a couple can enjoy while relaxing at home or even light for a romantic candlelit dinner. Some time back, candles were given for practicality—they were people’s main source of light in their homes—but also symbolism. Significant across many cultures and religions, candles are intuitively associated with light and warmth. Even weddings sometimes feature unity candles that stand for bride and groom. Giving candles to newlyweds was traditionally understood as a blessing for them to always have light in their home, as well as a reminder of their warmth and love for each other.

Recommendation: For a fresh, refreshing scent that brings to mind the outdoors, an Irish Meadows Ireland candle does the trick. If you sniff closely, you can delineate the exact scent into wildflowers, fresh herbs, and grass, and it’s absolutely blissful to light in the home after a long day. 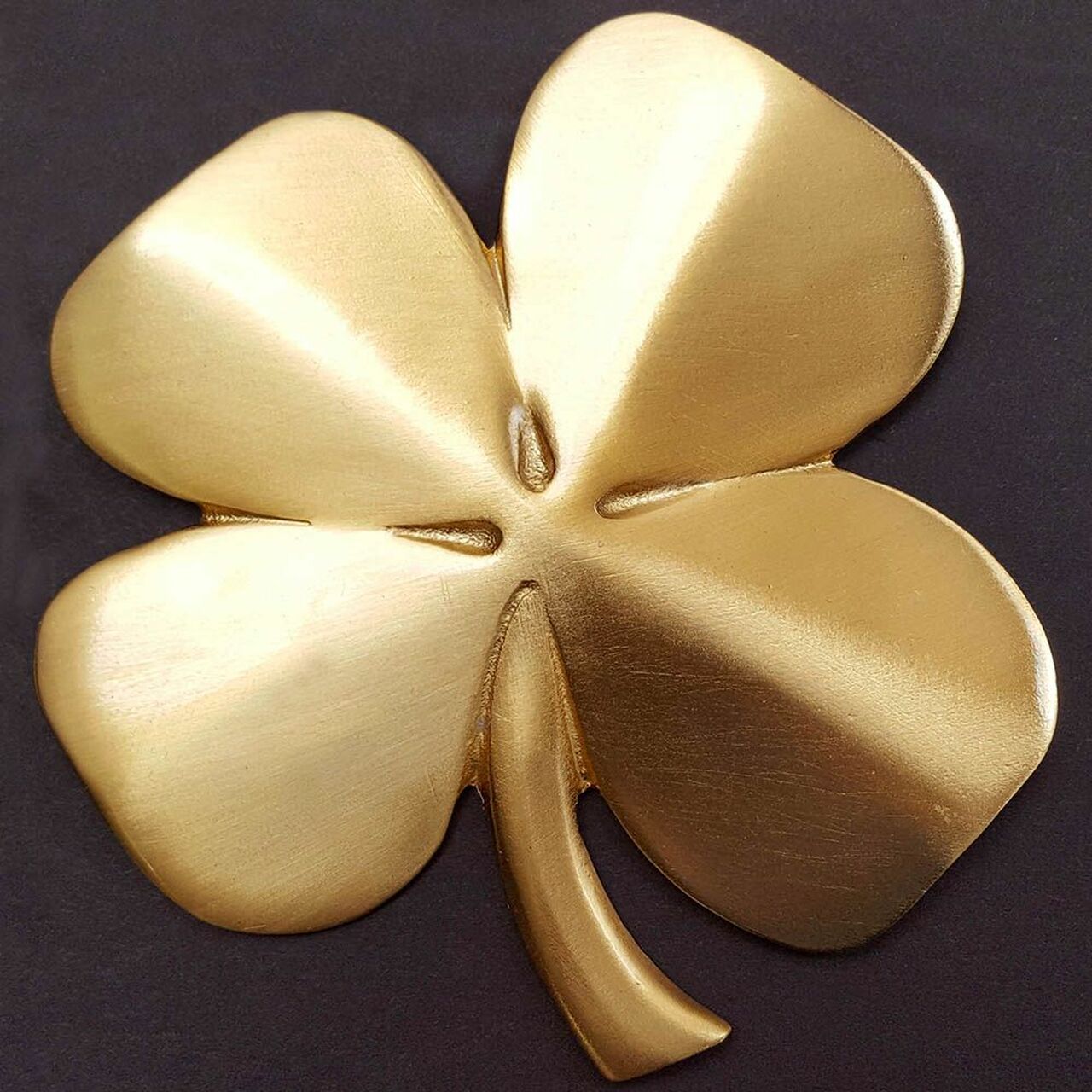 The horseshoe is a widely recognized symbol of good luck, and it happens to play a special role in Irish weddings! Its primary use is as a good-luck charm that’s hung somewhere in the house, usually right above the main door. Irish tradition adds a twist to this. In weddings before, brides would carry a horseshoe on her wedding day for luck in her marriage. It was impractical (and awkward-looking) for her to just hold it, so she could place it on her bouquet or sew it on the hem of her dress, bringing it along as she walked down the aisle. There are modern brides who still do this, but their horseshoes are made of porcelain or silver rather than metal.

Recommendation: This Hanging Shamrock Décor is convenient because it’s ready to be hung anywhere inside the house! It’s no ordinary shamrock, either—aside from being gold plated, it represents a timeless Irish symbol, the shamrock.

Giving a traditional Irish gift to a couple who’s interested in Irish culture or who had an Irish-themed wedding is very thoughtful! It might be with them for years to come, and the right gift will bring them plenty of joy and accompany them on their married life.

Didn't find what you're looking for? Shop more Irish Wedding Gifts at ShamrockGift.com!