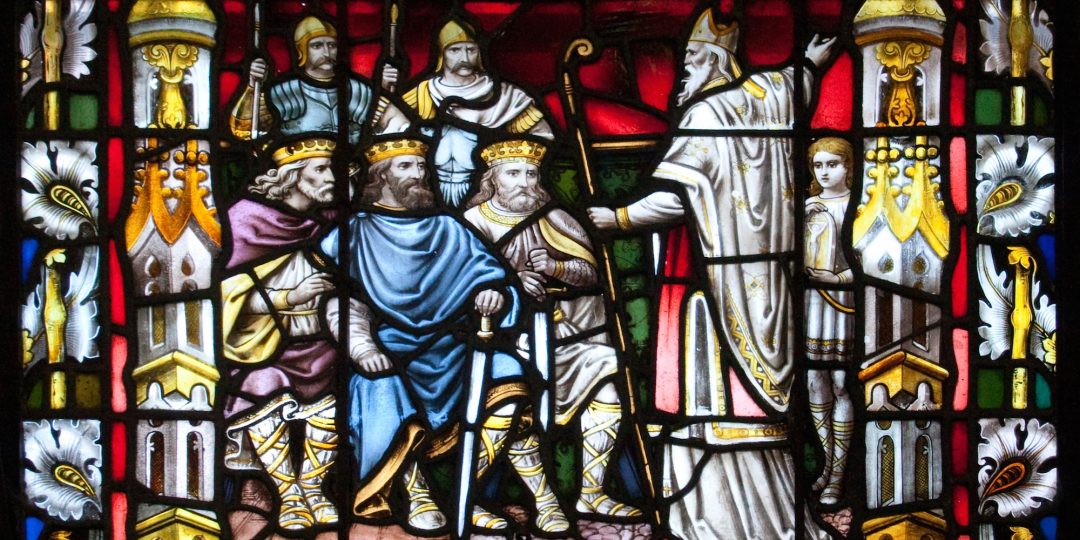 Every March 17, St. Patrick’s Day is observed by more countries than any other international festival. Many of them have even taken the occasion to the next level, developing their own traditions over the centuries in the name of celebrating Lá Fhéile Pádraig (“St. Patrick’s Day,” in the Irish language) — and, indeed, and the people of Ireland as a whole.

However, despite this worldwide holiday’s immense popularity, biographical information about St. Patrick himself has always been something of a shadowy subject among his many celebrants. In fact, a great number of the stories we know and love about this all-important figure of Ireland are just that — stories, many of them allegorical in nature and difficult to place on any logical timeline.

Because of this, in honor of our beloved Paddy, as well as all of the fun and festivity his life and exploits bring to Ireland and the rest of the world on a yearly basis, we at Shamrock Craic rolled up our sleeves, knuckled down, and done the research for you. Through some hard work, we’ve separated the fact from the fiction, analysed minute the details, and cut back the fat. The result, you ask? A comprehensive look at the fascinating true life story of the Apostle and Enlightener of Ireland, St. Patrick!

WHO IS ST. PATRICK?

To begin at the beginning: we know for certain that Patrick was born sometime in the fifth century. While the exact date of his arrival into the world has never been clear, records show that, as an adult, he was active as a missionary in Ireland from around 550 onwards. Take careful note of the use of the word “missionary,” here. If you’re thinking that it sounds as though we’re suggesting that Ireland's most famous saint didn’t hail from the island of Ireland at all, you’d be right on the money.

All evidence points towards Patrick having been born in Roman Britain, with consensus split between Wales or Scotland as his specific homeland. Several scholars point to a man from Wales named Maewyn Succat as the real St. Patrick. Maewyn's father, Calpurnius, was a deacon and high-ranking member of Roman British society. Despite that, it’s often said that Maewyn was a non-believer for the early part of his life.

The story of St. Patrick’s first journey to Ireland defies belief for many, though if the Confession of St. Patrick (a series of letters said to have been penned by the saint himself in his later years, signed only "Patricius") is to be held up as truth, then believe it we must. At the age of 16, Patrick was kidnapped by a crew of pirates of unknown origin, who brought him to Ireland and sold him into slavery.

For six long years, Patrick worked in Ireland as a sheep-herder. According to the Confession, it was during this time that he came fluent in the Irish language and familiar with the country’s customs. Critically, it was also then that he found God. Eventually, in the midst of his unhappiness and suffering, Patrick was moved to convert to Christianity — and, as we all know, changed the face of Ireland forever in doing so.

WHAT DID ST. PATRICK DO?

As Patrick’s connection with the holy powers grew over the years, so too did his loneliness and yearning to reunite with his loved ones. He wrote in the Confession that, while tending to his flock one day, he heard a voice telling him that his chance to escape back to his homeland would soon arrive. Running on desperation and blind faith, Patrick deserted his slavers and escaped to the nearest port, seizing his chance to board a ship home. Miraculously, or by virtue of sheer dumb luck, he was successful, and returned at long last to his overjoyed family several weeks later.

For a time, young Patrick happily in his native land once more. However, what happened next is so breathtakingly strange that, though it’s been debated by scholars time and time again, no earthly explanation can be attributed to it. In a dream, Patrick is said to have heard the voices of the people of Ireland call out to him: “We appeal to you, holy servant boy, to come and walk among us.” He was thoroughly shaken, yet compelled to act, and returned to the land in which he was enslaved as a Christian missionary, intent on converting the mostly-pagan population of the island to his monotheistic faith.

It’s estimated that, in his time spent travelling all of Ireland, Patrick baptized thousands of people. He ordained the priests that lead the new Christian communities, and also converted countless wealthy women, many of whom became nuns, despite the objections of their families. In addition to this, he swayed the beliefs of some of Ireland’s most fervently pagan kings, all the while accepting no payment or gifts offered to him by the grateful natives in exchange for his teaching.

However, the path of Patrick’s new, vocation-driven life didn’t always run smooth. Despite the overall success of his mission, the Confession of St. Patrick very clearly indicates that Patrick’s position as a foreigner in Ireland often spelled out trouble. While some welcomed him with open arms, other scorned him for his attempts to uproot the long-established polytheistic belief system. Because he so vehemently refused the gifts of local royalty, he was without affiliation and legal protection, and was more than once attacked, robbed, and put in chains for his actions. However, there’s no doubt that, for the most part, Patrick walked free. Many say this is because of the miracles.

THE MIRACLES & MYTHS OF ST. PATRICK

There are countless stories that describe how over the course of Patrick’s mission in Ireland, he performed countless acts that could not be readily explained by any natural or scientific law. These miracles, we’re told, were facilitated by God and God alone.

One story, for example, relates to an instance in which Patrick’s walking stick was transformed into a living tree. It’s said that during Patrick’s second (and only willing) journey from Roman Britain to Ireland, he carried with him a staff made of ash wood. Before crossing the sea, he arrived in an area in England now known as Aspatria (or “Ash of Patrick”) and began to evangelize. He thrust the stick into the ground in an act of passion, and the story goes that his message took so long to get through to the locals that, by the time he was prepared to move on, the stick had taken root and grown into a massive ash tree. An interesting and perhaps slightly biased implication about English teachability from an Irish perspective, without doubt.

Another well-known tale centers around Patrick’s supposed banishing of all of the snakes in Ireland: when he was attacked by a horde of them during a 40-day fast he was undertaking on top of a hill, he became enraged, and vowed to chase all of them into the sea. One particularly colorful telling of this story involves the oilliphéist, a massive snake-dragon hybrid who caught wind of Patrick’s plans and opted to escape ahead of time. The creature tore through the land as it made for the coast, leaving in its wake a scar in the land that would eventually flow with water; today, it’s known as the River Shannon, the longest river in Ireland.

There are many who any argue that St. Patrick’s banishing of the snakes could never have happened, as all scientific evidence points towards there never having been snakes in Ireland at all (or, at least, after the most recent ice age ended 12,500 years ago). Well-known naturalist Nigel Monaghan, keeper of Natural History at the National Museum of Ireland, Dublin, has an alternate explanation for the story’s origins: the snakes where a metaphor for the druidic people, who Patrick “drove” out of Ireland by spreading the Christian faith.

A third story, told in the twelfth-century work Acallam na Senórach, tells of Patrick’s meeting with two members of the ancient band of old Irish warriors, the Fianna, who had somehow survived until his day. It’s said that Patrick sought to convert these characters, though they were resistant, passionately defending their pagan beliefs; a fascinating contrast of the sensual and wild ways of the old pagan lifestyle and the peaceful, but comparatively unexciting way of life offered by the Christian faith, this story is considered to have sprung up as a means of explaining why Christianity was ultimately successful in spreading all across Ireland.

Perhaps the most famous legend of St. Patrick concerns the instance in which he used a national flower of Ireland, the three-leaved shamrock, as a teaching tool in order to explain the separate but equal roles of the Father, the Son, and the Holy Spirit to Ireland’s pagan population. The shamrock, as a result, is highly associated with Patrick even today. Irish monk and historian Muirchú Moccu Machtheni wrote in his seventh-century text The Life of Patrick that Patrick taught the lesson of the shamrock in 433 A.D. on the Hill of Slane, in Co. Meath. According to Moccu Machtheni, Patrick began his sermon by lighting a mystical fire at the hill’s highest point in an act of defiance against Laoire, a high king who hated him. The fire could not be put out by anyone but Patrick, who did so only when he was finished speaking to the crowd.

THE EVOLUTION OF ST. PATRICK'S DAY

One of the most commonly-asked questions regarding St. Patrick is why his feast day is celebrated specifically on the 17th day of March each year. The answer is simple: this is the day that Patrick is believed to have died. After passing away of old age, he was supposedly buried at Down Cathedral in Downpatrick, Co. Down, alongside Ireland’s other patron saints, Brigid and Columba. Though there’s little concrete evidence with which to prove this, the site continues to attract large groups of pilgrims who wish to pay their respects to this important figure in Irish history.

So, how was it that Patrick became St. Patrick, making the critical move from missionary and bishop to the venerated figure known all over the world today? The answer is simpler than you might think. For most of the first thousand years of Christianity, the canonizations of saints were done on a regional level, rather than each one going through a set process at the Vatican, as they do today. After the death of someone considered to have been very holy, it was down to the local church to decide whether or not they could be celebrated as saints. Due to this, St. Patrick has never been officially canonized by the Pope — though he is referred to as a Saint in Heaven by many Christian churches worldwide, and remains one of the most well-known and popular Christian saints today, both in Ireland and abroad. Some things really do just go without saying!

It was in the mid-1990s that the Irish tourism authorities began to increase their efforts to intertwine St. Patrick’s Day and the identity of Ireland in the global consciousness; many think that this was in part an effort to reclaim the holiday from the United States, where many feared it had become kitschy and overly-stereotypical.

Despite the relative success of these efforts, it’s not a stretch to say that nowadays, St. Patrick himself remains something of an afterthought in the festivities — so spare the Ireland’s fascinating patron saint a thought of thanks this March 17, and be sure to share some of the facts you’ve picked up here with your friends and family when you head out to celebrate!